Info On The ‘Civil Gideon’ Issue

Our recent mention of Civil Gideon – the idea that citizens should have a right to an attorney in some civil cases just like they do in criminal cases – brought some requests for more info. We would refer to the National Coalition for a Civil Right to Counsel (link below) and note the milestone New York Times op-ed by Matthew Desmond, an author and assistant professor of sociology and social studies at Harvard.
Desmond wrote in 2012 about the problem of housing evictions: “… in many housing courts around the country, 90 percent of landlords are represented by attorneys and 90 percent of tenants are not. This imbalance of power is as unfair as the solution is clear. When tenants have lawyers, their chances of keeping their homes increase dramatically. Establishing publicly funded legal services for low-income families in housing court is a cost-effective social policy that would prevent homelessness and uphold our ideals of fundamental fairness.”
Desmond acknowledged that his research indicated we have many fair, honest and hardworking landlords but also noted that many people keep their homes when they have lawyers. Research newest trends, like Ohio’s move to provide lawyers in eviction cases, here: Civil Right to Counsel.

Most of us know that we have a right to an attorney if we’re arrested, but a movement is afoot to provide a similar provision for those facing civil lawsuits. In particular, cases involving “human need” like child custody and shelter would qualify for the “civil Gideon” program. “Gideon” is the name of the court cases that created the “right to a lawyer” in criminal court.

In Pennsylvania, the Pittsburgh Post-Gazette reports that “… a statewide coalition of leaders from the Allegheny County, Dauphin County, Philadelphia and Pennsylvania bar associations, as well as other related groups, held public hearings on the idea of expanding the Gideon ruling to civil cases. It is recommending the Pennsylvania Supreme Court establish an Access to Justice Commission, similar to those in 32 other states, which would further explore how to implement such a measure”

In addition to establishing a commission, the newspaper noted, a recent report recommends the Pennsylvania Legislature appropriate $50 million for civil legal services and work toward establishing a right to counsel in civil legal matters where “fundamental human needs are at stake.”

You can read the report here. 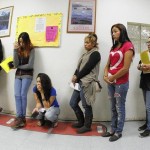 A nationwide computer glitch has stalled thousands of civil lawsuits over immigration, according to a Dallas Morning News report that says a “… a month-long computer malfunction continues in the Dallas immigration courts and those around the nation. Even before the techno-problems, there was a significant back log of about 5,600 cases for the five judges of Dallas.”
The delays will no doubt draw attention to the differences between civil and criminal immigration systems, especially the fact that the criminal dockets and outcomes are much more transparent than civil actions taken by, or against, the government.
For example, the Morning News report includes information from a Syracuse University-based research group that “… already, a backlog of nearly 367,000 pending cases weights the immigration courts through March 2014…” The group says it hopes to bring transparency to the nation’s federal agencies, including the immigration courts where court filings aren’t public as they are in the federal criminal, civil and bankruptcy courts. The non-profit runs a massive fact-gathering system using the Freedom of Information Act, according to the Morning News.

Check it out on the Scoop Blog here: Computer hardware failure in immigration courts snarling some cases

Thousands of civil lawsuits can be expected in U.S. courts after a California ruling that banks foreclosing on homes that are being rented become, in effect, the new landlord – and thus subject to the same eviction rules as any other landlord. This is important in hundreds of thousands of cases where the banks simply evicted renters when they took over homes, sometimes on short notice and sometimes destroying property.
Businessweek has a report: “The ruling ‘says essentially that banks and other players in the mortgage industry have to play by the same rules as other property owners,’ said Richard Rothschild, an attorney for renter Rosario Nativi, who lost her possessions and Sunnyvale, California, home in 2009 after the homeowner defaulted on the mortgage, unbeknown to Nativi, and the bank acquired the property. Nativi’s lawsuit, which seeks damages for the loss of home and property, will proceed in state court in San Jose, California, he said.
During the housing bust, more than 200,000 tenants lost their homes in California alone. While this was a state court ruling, the California Supreme Court has let it stand and experts think it will trigger the issue in other states.
Read the story here.