Images of three-year-old Aylan Kurdi, one of at least 12 Syrians who drowned trying to flee that war-torn region, have broken through the news clutter to actually shock the world. But they should also remind us that 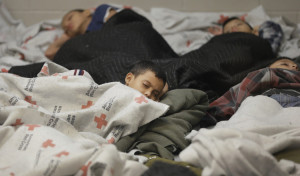 the United States has a refugee crisis of its own, and a federal judge has ordered the “family detention camps” closed later this month because they are illegal. The immigration courts are swamped, cases are backed up for years and thousands of “border kids” are in dangerous limbo.

To refresh your memory from when our domestic crisis was seizing the world stage, look here:
United States refugee children – Google Search