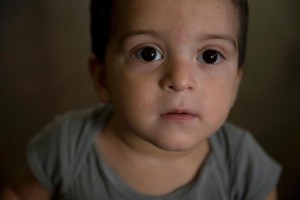 The Associated Press reports on 1-year-old Joshua Tinoco, who pauses while playing at his relative’s home in Los Angeles. Writing from Los Angeles, Amy Taxin tells the story of a 1-year-old facing deportation even as his mother is allowed to stay.

Taxin writes that “… at a brief hearing, a government lawyer tells the teenage mother that her son is an immigration enforcement priority for the United States and should be sent back to his native Honduras even though she is being allowed to stay and seek a green card.”

The story goes behind the numbers to outline human conditions. It also reminds us of some staggering numbers: More than 57,000 unaccompanied children from El Salvador, Guatemala and Honduras arrived on the border in the last fiscal year, and since then another 18,000, government statistics show. Immigration courts have fast-tracked the cases in a bid to stem a growing backlog.

It’s an AP story, and they have legs. Let’s hope this one gets around.