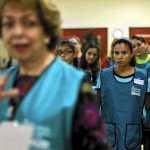 Just when you think the “Border Kids” crisis where thousands of minor asylum seekers flood the borders, the situation takes a turn for the worse. Now, the Los Angeles Times reports, “… more than 7,000 immigrant children have been ordered deported without appearing in court since large numbers of minors from Central America began illegally crossing the U.S. border in 2013, federal statistics show.”

Not that anyone knows much beyond those orders. The Times notes that immigrant advocates say many of those children were never notified of their hearing date because of problems with the immigration court system. Times sources say that some notices arrived late, some went to the wrong address or perhaps there was no notice delivered at all. Those sources also say some children were ordered to appear in a court where they were initially detained, not where they are living now.

Also, nobody really knows how many of those children choose to just not show up for the hearing, or how many were actually notices. “What was a border crisis has now become a due process crisis,” said Wendy Young, president of Kids in Need of Defense, an advocacy group, in the Times report. Oh, and it is also not known how many of those children facing deportation orders have been sent home – you have to wonder if they even know the hearings happened.

Read more on the mess at the Times: http://www.latimes.com/local/california/la-me-children-deported-20150306-story.html#page=1