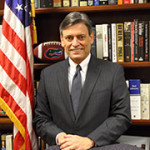 When Florida Chief Justice Jorge Labarga organized a statewide commission to study civil justice access issues, it was suspected that one benefit might be to at least create conversation around the issue. While other progress might be slow in coming, you can at least point to ongoing discussion as a success. A case in point is a recent Gainesville Sun newspaper editorial getting picked up around the state.

The piece notes that when “… someone faces a legal problem with a landlord, a family law issue or other civil disputes, finding and affording the right lawyer can be a challenge. The World Justice Project ranked the United States 65th out of 99 countries in accessibility and affordability of civil justice… the problem is particularly bad in Florida. An estimated 60 percent of residents can’t afford an attorney to address their legal need, but don’t qualify for legal aid, according to officials with The Florida Bar.”
The editorial addresses the idea of matching young lawyers with clients via technology and reports on a bar association push-back on using a dues increase to fund improvements. Clearly, it continues the civil justice conversation that other states should be having. Read more here.