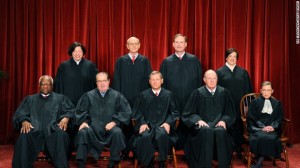 Photo from CNN report: Justices of the U.S. Supreme Court

Obamacare and same-sex marriage naturally dominated attention over recent U.S. Supreme Court decisions, but a huge housing issue also got a 5-4 ruling that leans toward the court’s liberal side. The court, in effect, re-affirmed a federal law passed in 1968 to combat housing discrimination by, as CNN explained, “… holding that the law allows not only claims for intentional discrimination but also, claims that cover practices that have a discriminatory effect, even if they were not motivated by an intent to discriminate.”

Justice Anthony Kennedy wrote the 5-4 opinion for a closely divided Court concerning the scope of the Fair Housing Act. He noted that “… much progress remains to be made in our nation’s continuing struggle against racial isolation.” His opinion was joined by Justices Ruth Bader Ginsburg, Elena Kagan, Sonia Sotomayor and Stephen Breyer.
Opponents including the state of Texas argued that the law punished outcomes without any intent of harming anyone, and actually injects more, not less, race into housing development decisions.
Read the CNN coverage here.