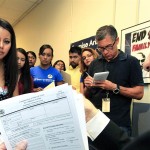 This photo was part of an NBC News report (12/14/14), “Demand Intensifies for Nonprofit Immigration Lawyers” discussing how the US immigration system is seriously lacking in how it represents the poor.

NBC News is among those taking a look back at 2014 and finding the country’s immigration system seriously lacking in how it represents the poor. Says NBC, “… the past summer’s flocking of children and families to the U.S.-Mexico border, the president’s impending executive action on immigration and the two-year-old Deferred Action for Childhood Arrivals, DACA, have intensified demand for immigration attorneys, particularly those who charge little to nothing. With each success, they amplify the difference good legal help can make in the lives of immigrants.”

NBC has this quote in it’s Storyline report: “We’ve long known that results in immigration court, in particular, vary widely depending on whether you have legal representation or not,” said Crystal Williams, American Immigration Lawyers Association, AILA, executive director. She adds that “… what we are seeing quite honestly, is the people who are getting asylum and are getting bonded out of (the immigration detention center in) Artesia, had the attorneys not been there, they would have been removed already.”
See the NBC report here: Demand Intensifies for Nonprofit Immigration Lawyers