A federal judge in Los Angeles has given the federal government until Oct. 23 to release thousands of “border kids” seeking refuge in the United States. The Los Angeles Times explains that Judge Dolly Gee said that children should not be held for more than 72 hours unless they are a significant flight risk or a danger to themselves and others. 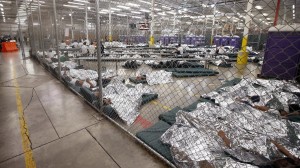 The LAT story also noted that “… the case centers on 1997 legal settlement — known as the Flores agreement — that set legal requirements for the housing of children seeking asylum or in the country illegally. In July, Gee found that the government had violated that agreement; she repeated that findingFriday. Federal attorneys had argued that Gee’s initial ruling would spark another surge of illegal immigration across the U.S.-Mexico border. Gee denied the government’s request for reconsideration, equating that argument to “fearmongering.”

The Times feels that “… it’s likely that hundreds of immigrant families will remain locked up and in limbo as the case makes its way through the courts — possibly up to the U.S. 9th Circuit Court of Appeals.”
Read the story here: Judge orders prompt release of immigrant children from detention