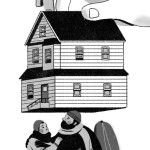 Image published as part of a New York Times OpEd, “How to Fight Homelessness” published 10/19/15.

A New York Times op-ed piece by a NY City Council member and a homeless advocate is making the case for legal representation for some civil cases. It is an argument about reducing the homeless population. They note that something like 80 percent of people facing eviction remain in their home if they have an attorney. They say that the advantage of legal representation is such that some landlords just don’t bother following through if the tenant has an attorney.

Council Member Mark D. Levine, representing the city’s Seventh District and Mary Brosnahan, who is  president and chief executive of the Coalition for the Homeless, continue making a financial argument: “It costs about $2,500 to provide a tenant with an attorney for an eviction proceeding, while we spend on average over $45,000 to shelter a homeless family.”
Read their argument here: How to Fight Homelessness