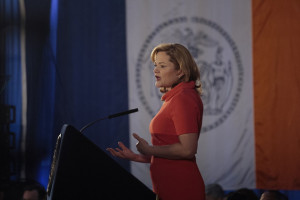 Council Speaker Melissa Mark-Viverito at her State of the City address. (Photo: William Alatriste/NYC Council as reported in the New York Observer)

Despite the welcomed statewide “traffic court amnesty” in California, it remains clear that municipal governments are leading the way in providing civil justice leadership. The latest example comes from the Big Apple, where the city council has voted to create an “Office of Civil Justice” to connect poor people facing housing and other issues with attorneys.

New York Council Speaker Melissa Mark-Viverito has dubbed the proposal “the people’s law firm” and said in a press conference that “… limited access to an attorney means limited access to justice.” Ms. Mark-Viverito said today at a press conference before the Council’s vote on the bill. As the NY Observer reported, “… while plaintiffs in criminal cases are guaranteed lawyers, those in civil cases—which can include deportation, child custody and eviction proceedings—are not.”