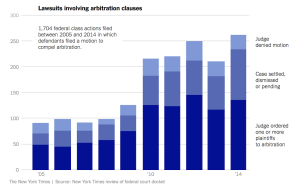 reform, especially in California where the practice is widespread across many industries. In particular, the series focuses on how arbitration clauses can remove disputes from courts into private practices.

The paper says that those practices “…often bears little resemblance to court… Over the last 10 years, thousands of businesses across the country — from big corporations to storefront shops — have used arbitration to create an alternate system of justice. There, rules tend to favor businesses, and judges and juries have been replaced by arbitrators who commonly consider the companies their clients, The Times found.”

This is the kind of series that nearly always brings a call to action, so stay tuned. Check in on the series here.