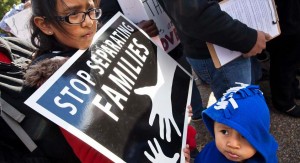 As reported in Politico on 8/7/15: US citizens Esmeralda Tepetate, 10, with her brother Sebastian, 2, whose parents are originally from Mexico, holds a sign that says “stop separating families” during a rally for comprehensive immigration reform, Friday, Nov. 7, 2014, outside of the White House in Washington. After the midterm elections immigration groups are pushing for executive action. (AP Photo/Jacquelyn Martin)

Politico and others are reporting that the Obama administration is asking a federal judge to reconsider her ruling that the U.S. must release of tens of thousands of immigrant mothers and children who tried to cross the southern border illegally. Says Politico: “… in a 60-page response filed late Thursday, Justice Department lawyers argued that family detention facilities run by the Department of Homeland Security are a necessary tool to help deter illegal migration to the United States.”
The judge’s order is starting to gain notice, as has the family detention issue. President Obama also finds himself at odds with his own party, according to Politico, which reports that “… detaining immigrant families caught at the border have run into steep opposition from Democrats on Capitol Hill. Nearly all members of the House Democratic Caucus signed onto a letter circulated last week by Rep. Zoe Lofgren (D-Calif.), a former immigration attorney who is the ranking member on a House subcommittee overseeing the policy.”
“It is long past time to end family detention,” the House Democrats wrote in the letter. “In light of this recent federal court ruling, we urge you take all necessary and appropriate steps to bring the Department’s practices in line with the settlement agreement and the recent court ruling.” Keep track of the slow-burning fuse here:
Read more: DOJ fights family detention ruling (Politico)

← L.A. Times Calls Out Congress Over Immigration Court Backlog
In Kentucky, Clerk Pits Supreme Court Against Supreme Being →
Logging In...