Sen. Patrick Leahy: Many children facing deportation are forced to proceed before a judge without a lawyer 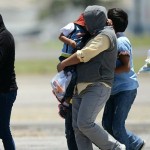 Immigrant children and their mothers arrive in Guatemala after being deported from the United States in 2014. The migrants had come to the U.S. to flee a humanitarian crisis in their homeland. Photo Credit CNN Report, 5/9/16

A powerful U.S.senator, who serves as the ranking Democrat on the Senate’s justice committee and on the body’s subcommittee on immigration, has authored a national CNN opinion piece blasting the nation’s current approach to the “border kids,” our term for often unaccompanied children seeking asylum in the U.S. Asserting that a fair day in court is “… a bedrock principle of our justice system,” Sen, Patrick Leahy of Vermont said that having legal representation is “… especially important for children who cannot advocate for themselves.”

The Democrat didn’t call out the Obama Administration, but does ask “… so how could we possibly expect children to navigate court proceedings on their own?” He answers by noting “… and yet, each year, the United States government does just that. In immigration court, in case after case, a trained federal prosecutor represents the interests of the government while too many children facing deportation are forced to proceed before a judge without a lawyer.” He also says that “.. it is the longstanding policy of the Department of Homeland Security and the Department of Justice to pursue immigration cases against children, even very young children, without lawyers. And it is a longstanding executive policy they are actively defending in federal court, right now.”

You can read his comments, which do not include plans from his various committees, here:
http://www.cnn.com/2016/05/09/opinions/children-need-lawyers-leahy/