US Increases Cap On Accepting Refugees 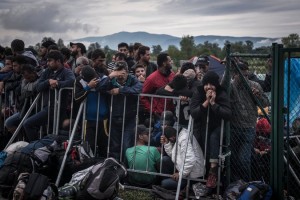 Photo from The New York Times 9/21 article. They report “Migrants in Bregana, Croatia, near the border with Slovenia. Authorities in Slovenia on Sunday were halting migrants at its border with Croatia to the south and allowing them to pass in small groups.”

Secretary of State John Kerry, speaking in Germany, announced that the United States will increase the number of “worldwide” refugees it will accept until it reaches 100,00 per year in 2017. That is up from the current annual cap of 70,000. The move is in reaction to the high-profile crisis involving European migration and there was no conversation about how the than 400,000 pending immigration cases, many of which involve refugee status claims, might be effected.
Read the NYT story here: U.S. Will Accept More Refugees as Crisis Grows