How odd is it that a national Veterans Administration scandal is unfolding just as the nation observes Memorial Day? Reports of false documentation, delayed treatment and even deaths brought an address from President Obama last week, including his promise that anyone responsible will be “punished.” The president also expressed the hope that the scandal does not become “another political football.” 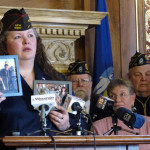 But of course, it will and we should note that in the world of asbestos damage claims, veterans have always been part of the debate. Because the military used so much asbestos decades ago, many vets are getting mesothelioma today. The most recent high-profile example of how that plays out came as Wisconsin passed reforms on asbestos-focused bankruptcy trusts.

Victims’ attorneys argued that increased transparency was unfair to veterans and would make gaining compensation more difficult. And several veterans groups lobbied against the measure. But the AMVETS group countered that bogus claims could deplete the trusts and thus reduce payouts. The “tort reform” advocates say that opposing vets eventually dropped their opposition, but that was only after the governor assured them he was going to sign the legislation, according to the Journal Sentinel newspaper.