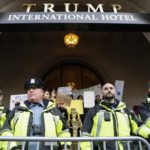 President Trump’s immigration orders over the weekend brought both protests and legal challenges, with several judges ordering halts to the program and scholars offering opinions. The Washington Post had a good article outlining the civil concerns, including listing some of the groups opposing the move:

The story also predicted more challenges under both constitutional grounds and legal decisions over decades.