Yikes: ‘RBG’ Speaks Her Mind On Trump, May Disqualify Herself 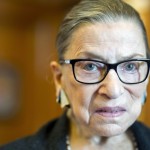 It turns out that Donald Trump is not alone in speaking his mind and worrying even his biggest fans. Supreme Court Justice Ruth Bader Ginsburg, in a New York Times interview, made it pretty clear she can’t imagine a United States under a President Trump. She even joked about moving to New Zealand, although to be fair she was quoting her late husband – but the sentiment was pretty clear.

That’s a problem, say legal scholars. There’s a reason that justices are seldom vocal in the political arena. If Mr. Trump is anxious about having a judge with Mexican heritage on his civil case, can you imagine him with a justice who has made her view so clear? Aaron Blake, writing for the Washington Post, notes that Ginsburg “…. goes to a place justices almost never do – and perhaps never have – for some very good reasons.”

The report cites some pretty strong voices saying this was a mistake. Like this: “Louis Virelli is a Stetson University law professor who just wrote a book on Supreme Court recusals, titled ‘Disqualifying the High Court. He said that ‘public comments like the ones that Justice Ginsburg made could be seen as grounds for her to recuse herself from cases involving a future Trump administration. I don’t necessarily think she would be required to do that, and I certainly don’t believe that she would in every instance, but it could invite challenges to her impartiality based on her public comments.'”