It Had To Happen: Immigrant Avoids ICE Hold, Now A Murder Suspect

It made headlines last year as jurisdictions, acting on a federal court decision out of Oregon, decided they would not honor “hold” requests by U.S. Immigration and Customs Enforcement, known as ICE. Now a San Francisco murder suspect was freed despite such a hold request just before committing the alleged killing. But an attorney for the San Francisco Sheriff’s Department says “…nothing in his background showed anything like that.” 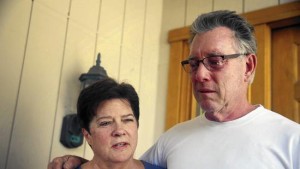 As reported in the LA Times: Liz Sullivan and Jim Steinle, parents of Kathryn Steinle, who was fatally shot Wednesday in San Francisco. A suspect with seven felony convictions who had been deported five times has been arrested in connection with the shooting. (Lea Suzuki / San Francisco Chronicle)

Says an ICE spokesperson: “An individual with a lengthy criminal history, who is now the suspect in a tragic murder case, was released onto the street rather than being turned over to ICE for deportation… we’re not asking local cops to do our job. All we’re asking is that they notify us when a serious foreign national criminal offender is being released to the street so we can arrange to take custody.”
San Francisco County Sheriff Ross Mirkarimi said ICE misses the point. “ICE was informed about San Francisco’s position on detainers,” he said, “but did not seek a court order for Sanchez’s transfer as required under the law.”
The Courts Monitor follows immigration issues because the cases are civil, not criminal. Read more from the L.A. Times here:
Fatal shooting in San Francisco ignites immigration policy debate