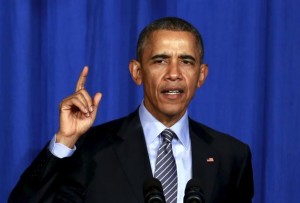 As reported by Reuters on 11/10/15: “U.S. President Barack Obama delivers remarks at an Organizing for Action event in Washington November 9, 2015. REUTERS/Yuri Gripas”

In a move that seems likely to bring the U.S. Supreme Court into the legal fray over President Obama’s executive actions on immigration, the 5th U.S. Circuit Court of Appeals in New Orleans decided 2-1 to uphold a May injunction against the measure. Reuters notes that the decision “… deals a blow to Obama’s plan, opposed by Republicans and challenged by 26 states. The states, all led by Republican governors, said the federal government exceeded its authority in demanding whole categories of immigrants be protected.”

Millions of immigrants are effected by the court decision but “discretion” in law enforcement is expected pending further legal appeals, most likely to the Supreme Court.