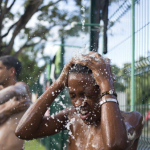 The typical narrative of undocumented immigration, sneaking across the border, is giving way to people who turn themselves in at the border, say officials in a Tucson.com report. Why? The report by Perla Trevino of the Arizona Daily Star newspaper explains that “… as soon as people who turn themselves in at an official crossing point say they are afraid of returning to their home country, it sets in motion the asylum process, which can drag on for years.”

The report backgrounds that “… more and more on the Southwest border, the new challenge is mixed flows,” said Doris Meissner, former commissioner of the U.S. Immigration and Naturalization Service and senior fellow at the Migration Policy Institute. “The basic illegal immigration of young men or younger Mexicans who are purely coming for job function is basically behind us.”
One surprise: “Cubans are responsible for a large share of this growth. Since fiscal 2010, the number of Cubans presenting themselves at Southwest ports of entry has grown from 5,500 to nearly 34,000 as of June of this fiscal year.”
Immigration cases are a leading example of civil justice rationing. The immigration “courts” are actually Justice Department administrative hearings and the judges are employees of the department, not independent judges. The system is backed up by a half-million cases, including asylum seekers, many of them children who have arrived at the border independently of adults.