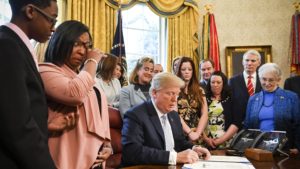 A new law that combats sex trafficking could indanger Internet freedom, according to the online news site, Vox.

A flurry of litigation could ensue if the warnings are true.

“The next big battle over internet freedom is here,” warns Vox in its April 23 article. “This month, Washington lawmakers overwhelmingly passed a narrow bill that seeks to crack down on sex trafficking online. To most, it seemed like a no-brainer: Sex trafficking is obviously bad. The law, however, changed Section 230 of the Communications Decency Act of 1996, a 20-year-old communications law that is the basis of the free internet as we know it.”

The new legislation, signed into law on April 11 by President Trump, “opens more avenues for victims of online sex trafficking to legally pursue websites that facilitate trafficking by amending Section 230, making it easier for federal and state prosecutors and private citizens to go after platforms whose sites have been used by traffickers. …” reports Vox.

“The law creates an exception to Section 230 that means platforms would be responsible for third-party content related to sex trafficking or conduct that ‘promotes or facilitates prostitution.’”

“Section 230 says that ‘no provider or user of an interactive computer service shall be treated as the publisher or speaker of any information provided by another information content provider’ (47 U.S.C. § 230). In other words, online intermediaries that host or republish speech are protected against a range of laws that might otherwise be used to hold them legally responsible for what others say and do. The protected intermediaries include not only regular Internet Service Providers (ISPs), but also a range of ‘interactive computer service providers,’ including basically any online service that publishes third-party content.”

The foundation continues, “This legal and policy framework has allowed for YouTube and Vimeo users to upload their own videos, Amazon and Yelp to offer countless user reviews, craigslist to host classified ads, and Facebook and Twitter to offer social networking to hundreds of millions of Internet users.

Section 230, according to Vox, faces more threats than the new anti-sex trafficking law, “but also in light of increased scrutiny on Facebook and the advent of platforms such as Airbnb and Yelp, where third-party content is the business model.”