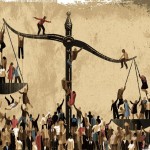 A new report by Bruce Wallace, writing for Al Jazeera America, details just how stalled the nation’s busiest immigration courts are, and how backlogged they remain. Writing from New York, he reports that “… depending on how you count it, this courthouse — actually a collection of 31 small courtrooms scattered across two floors of a tall federal office building in downtown Manhattan — is either the busiest or second busiest of the 58 immigration courts in the country. The one in Los Angeles got more new cases last year — a little over 18,000, compared with around 17,700 for Manhattan. But Manhattan has more cases pending: 60,538 compared with 51,878 in L.A. Or, on average, about 2,240 cases per New York judge. Judges in comparable courts have about 700 cases a year, according to the American Bar Association.

The story goes on: “Death-penalty cases in a traffic-court setting” is how Dana Leigh Marks likes to put it. She’s an immigration judge in San Francisco and president of the National Association of Immigration Judges (and, as such, one of two immigration judges in the country who are permitted to speak to the media). “The volume alone is like traffic court, and yet the stakes for someone who asserts a claim of asylum, if I am wrong — or even if I’m right but, because the law doesn’t allow me to grant relief, I have to deny them — they could be going back and facing death.”
Immigration courts, despite their name, are not actually part of the federal courts system. They are part of the Justice Department and the judges do not have much power over their colleagues who represent the government. They are civil courts, so there is no right to have counsel provided. Nationally, some 450,000 cases are pending with wait times reaching half a decade.
Read the Wallace story here: Immigration judges make life-altering decisions in overbooked courts | Al Jazeera America