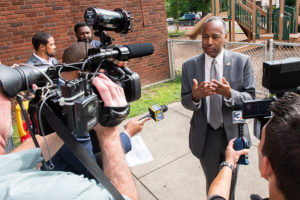 The U.S. Department of Housing and Urban Development has announced a charge against Facebook, alleging the tech giant violated the Fair Housing Act “by encouraging, enabling, and causing housing discrimination through the company’s advertising platform.”

In a recent press release, the agency previewed its case. “Today’s action follows HUD’s investigation of a Secretary-initiated complaint filed on August 13, 2018…HUD alleges that Facebook unlawfully discriminates based on race, color, national origin, religion, familial status, sex, and disability by restricting who can view housing-related ads on Facebook’s platforms and across the internet. Further, HUD claims Facebook mines extensive data about its users and then uses those data to determine which of its users view housing-related ads based, in part, on these protected characteristics.”

The Washington Post reports that HUD also “alerted Twitter and Google last year that it was scrutinizing their practices for possible housing discrimination.”

“Facebook, which HUD said controlled about 20 percent of the online advertising in the United States, appeared to be taken aback by the suit.”

← Farmers Breathe Easier After N.C. Trial. More Battles on the Horizon
Lawsuits pile up against Purdue Pharma, other drug companies over OxyContin →
Logging In...