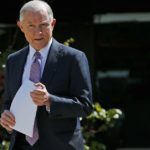 Politico is among the media outlets noting that, “… for all their opposition to the Trump administration’s immigration agenda,” immigration advocates are welcoming at least one part of the agenda: hiring more immigration judges. In a well-reported story, Politico’s Danny Vinik added that U.S. Attorney General Sessions “… announced that DOJ will seek to add 75 immigration judges to the courts over the next year and will implement reforms to speed up the hiring process. These changes address a real problem with the immigration system—a nearly 600,000-case backlog at the immigration courts—and the move was a rare occasion in which advocates applauded the administration, though they were concerned how Sessions would implement the changes.”

Later, Vinik even deep-dives enough to background that “…immigration judges are technically employees of the Department of Justice, a structure that inherently creates a conflict of interest,since their job is to rule on immigration cases that are pushed by DOJ prosecutors, whereas most of the judiciary is independent. Advocates and the immigration judges union have long pushed to remove the immigration courts from the DOJ. And during the Bush administration, a DOJ investigation found that several immigration judges received their jobs due to their political connections, a scandal that serves as a warning today.”

During comments at the U.S.-Mexican border, Sessions also announced a “streamlined” hiring process for those DOJ judges.