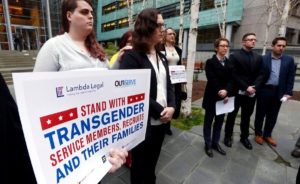 In this March 27, 2018, file photo, plaintiffs Cathrine Schmid, second left, and Conner Callahan, second right, listen with supporters during a news conference in front of a federal courthouse following a hearing in Seattle. Photo credit: Elaine Thompson/AP as reported in the Military Times on 8/24/18.

In Doe v. Trump, a federal court has ruled that the government “failed to show what deliberative process it undertook to decide some transgender personnel should not be allowed to serve,” according to Military Times.

According to the New York Times, the Obama administration announced in 2016 its plan for the armed services to begin accepting transgender recruits at the start of this year. President Trump “abruptly reversed course, announcing on Twitter in July 2017 that the military would ‘no longer accept or allow transgender individuals to serve in any capacity. …”