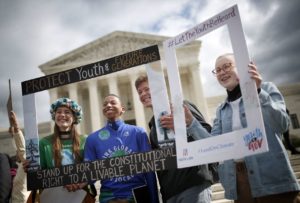 Fossil fuel producers could follow in the footsteps of tobacco companies, based on a new string of lawsuits targeting global warming, according to a Vox Media story.

“In 1998, 46 states and the District of Columbia signed on to the largest civil litigation settlement in US history, the tobacco Master Settlement Agreement,” Vox notes, referring to the litigation that forced tobacco companies to pay out more than $206 billion over 25 years.

“Now another wave of lawsuits is trying to hold powerful institutions accountable for an even bigger crisis, by making them pay and change their ways,” Vox reports. “At least eight US cities, five counties, and one state are suing some of the world’s largest fossil fuel companies for selling products that contribute to global warming while misleading the public about their harms. In parallel, 21 young people are trying to suspend fossil fuel development as part of their high-profile climate rights case, Juliana v. United States, against the government. (The case is currently awaiting a hearing at the Ninth US Circuit Court of Appeals.)”

“The Environmental Protection Agency was forced to regulate carbon dioxide to fight climate change as the result of a 2007 Supreme Court decision in a lawsuit, Massachusetts v. EPA,” the site explains.

Yet, these broad lawsuits can backfire as well.

“Climate change lawsuits could lead to multibillion-dollar payouts, and force an unwilling government to make cutting greenhouse gases a central priority. Both types of cases could set precedents that would last for decades,” Vox notes. “But litigation takes years of effort and can cost millions. If a court or a jury rules against the plaintiffs, they could end up worse off than when they started.”