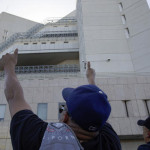 Protestors at the Metropolitan Detention Center during one of several May Day marches in Los Angeles, California. (David McNew/Getty Image

The Los Angeles Times, in an editorial, is heralding a decision to increase phone access to people facing immigration hearings. Among other issues, the LAT notes that part of the problem is that the government contracts detention of those people to private firms, which have their own policies. The newspaper also notes that lack of phone access equates to lack of legal representation, which is a key factor in deciding who gets to stay and who has to go.

The editorial notes that “… a legal settlement this week should help remove one obstacle facing detainees: their lack of access to telephones. In a case filed in a San Francisco federal court, detainees represented by the ACLU and other civil rights groups argued that the conditions of their detention in four California facilities interfered with their right to find counsel, to gather evidence on their own behalf and to receive a fair hearing when they make their cases in court. How were those rights being impeded? Through policies that severely limited their use of telephones.”

In another point, the Times says that “… part of the problem is the immigration detention system itself, which relies primarily on contracts between the federal government and the county jails or private companies that house detainees as well as other prisoners. Those facilities have their own rules about inmate access to telephones that also apply to immigration detainees even though the latter have not been charged with or found guilty of crimes.”

Read the editorial here: Why should immigration detainees be denied access to telephones?

← Central California Justice Among The Nation’s Most Rationed Court
Reform Afoot In D.C.? →
Logging In...