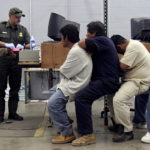 A man has his fingerprints scanned by a U.S. Border Patrol agent while others wait their turn.
Photo Credit: Reuters/Jeff Topping

Lindsay M. Harris, an assistant professor of law at the University of the District of Columbia, has posted a deep-dive analysis into how President Trump’s budgeting might impact immigration courts, but also offering some historic insight along the way. In a post at The Conversation website (link below) that was picked up by the UPI, she notes that “… [Trump’s] budget requests would add to the more than $40 billion that the Department of Homeland Security will receive this year. It would include $4.1 billion to start building a border wall and $2.65 billion to increase the number of immigration detention beds. In comparison, the fiscal 2018 budget requests $80 million to add 75 new immigration judges.”

Harris also backgrounds that “… since 2002, funding for immigration enforcement has more than quadrupled, from US $4.5 billion to $20.1 billion in 2016. During the same time period, resources for immigration courts have increased by much less – 74 percent.”
Read the excellent analysis here:
Is the US immigration court system broken?