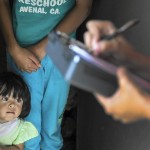 A federal immigration judge in Virginia, who helps train other such judges, is making headlines for asserting that even toddlers can defend themselves in court without counsel. The Los Angeles Times is among those quoting from a court transcript that is part of an ACLU case: “I’ve taught immigration law literally to 3-year-olds and 4-year-olds. It takes a lot of time. It takes a lot of patience,” Judge Jack Weil said. ‘They get it. It’s not the most efficient, but it can be done.'”

The LAT duly notes that “… in immigration court, there is no guarantee of counsel for adults or children. Advocates for immigrants have long argued that a person’s ability to make informed decisions — and their chances of being allowed to stay in the U.S. — are enhanced if an attorney represents them.”

The story also offers this context: “A total of 20,455 unaccompanied youths were caught at the border from October through the end of January, more than double the number during the same period the previous year, which also saw an increase over the year before that, according to U.S. Customs and Border Protection. Youths started streaming in large numbers across the border illegally during the summer of 2014.”