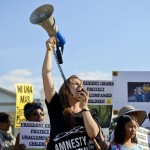 In an opinion piece in The Hill newspaper in Washington D.C., a San Antonio immigration advocate outlines a recent milestone in the immigration court backlog: “In numbers just released, the backlog in immigration courts has now risen above half a million cases (500,051). Immigrants wait an average of 672 days for resolution of their cases, and for some cases the wait can reach up to six years. The highest number of pending cases are in California (93,466 cases), Texas (87,088 cases), and New York (86,834 cases).”

Sara Ramey says that “… in Texas, where my NGO RAICES serves the immigrant community, the average wait for resolution of a case is 712 days. The San Antonio court is setting hundreds, if not thousands, of cases for Nov. 29, 2019 as a place holder until the court can find a date, likely on an even later day. And this is just to start proceedings, not to determine the merits of the case.

Ramey does a good job outlining the problems when cases go that long and makes an appeal for both political parties to step up on the issue. See her argument here: http://thehill.com/blogs/congress-blog/judicial/289875-immigration-court-delays-make-a-mockery-of-us-justice