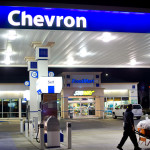 Gasoline pumps situated at a Chevron station in Milpitas, Calif., in February. A federal judge ruled that a record $9.5 billion environmental-damage award against Chevron was tainted. ASSOCIATED PRESS

California-based Chevron has won the latest court decision in a case that the Wall Street Journal calls “… one the longest running in corporate history.” The WSJ backgrounds that “… Monday’s decision affirms a lower-court ruling by U.S. District Judge Lewis Kaplan, who found in 2014 that the $9.5 billion environmental-damage judgment won by New York lawyer Steven Donziger and his Ecuadorean plaintiffs against Chevron was obtained through fraud and corruption. Judge Kaplan ruled Mr. Donziger couldn’t enforce the judgment in the U.S. or profit from the award anywhere in the world.

One reason the case will continue: “The appeals judges wrote that although the $9.5 billion judgment can’t be enforced in the U.S., their ruling does not stop the plaintiffs from taking action to enforce the judgment elsewhere.”

Read about the latest chapter of the saga here:http://www.wsj.com/articles/chevron-wins-ruling-blocking-enforcement-of-9-5-billion-ecuador-judgment-1470686218