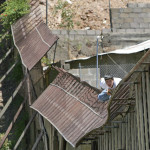 A man climbs over the international border into Nogales, Ariz., from Nogales, Mexico. Matt York / AP

The BuzzFeed News is among those noting the milestone in Immigration Court backlog, reporting that “… the backlog of immigration court cases has ballooned to an all-time high of more than 500,000, a number fueled by unaccompanied minors and families from Central America, officials said Wednesday” and adding that “… the Executive Office for Immigration Review (EOIR) said there are 500,051 pending immigration cases in the U.S. system. To deal with the backlog, EOIR plans to boost the number of immigration judges from 277 to 399.”

Reporter Adolfo Flores backgrounds that “… the backlog has been fueled by a growing number of unaccompanied minors and families, mostly from Central America, who have been crossing the border in recent years. Many of them are fleeing violence back home and are seeking better economic prospects in the US.”