In states like California where roughly 44 percent of residents speak a language other than English, court interpreters are a key component to reasonably equitable justice. Just last week, we noted the backlog of California immigration cases had trumped 500,000 making court interpreters a sought after commodity. 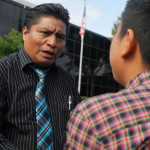 Earlier this month, the LA Times reported extensively on the challenge of Border Kids whose native language is Mayan.  Many of these kids are coming in from countries such as Guatemala to escape gang violence epidemic with the drug cartels.

They report, “Spoken by almost 80,000 people in mostly rural municipalities in Huehuetenango, Guatemala, Kanjobal is common in places like Santa Eulalia… but rare everywhere else.”

As with other court funding issues; however, funding has been short. The shortages have real consequences, according to the Times Report, “The shortage of interpreters is leading to a host of issues. Often, judges delay immigration hearings until one is found. At times, asylum seekers are deported even if they have a strong case because a qualified interpreter cannot be found in time. And unlike in immigration court, interpreters aren’t provided for free during asylum hearings.”

Gov. Jerry Brown just signed into law the California budget which includes nearly a 10 percent increase in funds for court interpreters, Slator.com reports, bringing the total over $103 million. This is a major development considering the Justice Index placed California in 30th place out of 52 for language access in its 2016 report.

The money isn’t going into a vacuum either, it appears. The reporter notes, “The numbers are huge. A 2015 report by the Judicial Council of California showed that court interpreters in the state provided a total of 254,000 service days from 2012–13.”

As other states struggle with the Border Kids crisis, court interpreter funding will likely become an ever present issue demanding more attention.