For one North Carolina teen, seeing his mom again meant a difficult, six-month journey through ICE, the courts and the ever shifting immigration waters. Having fled two powerful Honduran gangs – Mara Salvatrucha (MS-13) and the 18th Street Gang – seeking to add him to their ranks, Wildon Acosta became the face of the immigration crisis for the small Durham community who rallied to support his cause. 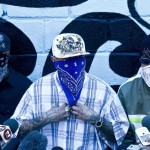 Part of the ongoing Border Kids crisis, Acosta feared the consequences of not joining one of the two gangs. ABC News recently reported, “Those two gangs are major contributors to the violence that has made Honduras the country with the highest homicide rate in the world according to the World Bank, forcing thousands to flee their homes. The government of Honduras, according to the United Nations’ refugee agency, estimates that 174,000 people were internally displaced within the country between 2004 and 2014 because of violence and insecurity.”

When federal agents arrested him on his way to school, the story continued, Acosta had gone from speaking only Spanish to earning a B average in English-only courses. He was even held a part-time job.

Acosta is hardly the only minor fleeing the violence, either, to build a new life here in the U.S. U.S. Customs and Border Protection reports that more than 63,000 unaccompanied minors were apprehended while attempting to cross the border between October 2013 and September 2014 as the gang violence was reaching a crescendo in Central America.

The issue of overhauling the immigration system has been on the front burner since George W. Bush was president. A former Governor of a border state, President Bush attempted to overhaul the system under his tenure, but was blocked by his own party. Subsequent attempts have come close, but real reform has failed each time.

This policy uncertainty has led to myriad stories of young people caught in a shifting web of changing rules, leading to a legal purgatory that Kafka would find surreal. Were it not for the community pressuring their local member of Congress to act on his behalf, Acosta would have been deported already. With $10,000 in bail money raised in two days, he is grateful to back in his community with his family, but his future remains uncertain as he works to file a petition for asylum. The support from his community undoubtedly means that he will have legal representation to aid him in making his case to become a legal, permanent resident of the U.S.

For minors and youth with legal representation, their chances of being granted asylum are significantly better. But, as we reported back in May, Sen. Patrick Leahy said, “In immigration court, in case after case, a trained federal prosecutor represents the interests of the government while too many children facing deportation are forced to proceed before a judge without a lawyer.”

For more on the Acosta case, be sure to check out the in-depth ABC News report. You can follow along with our two-year project tracking the Border Kids crisis here.

← CA Court Interpreter Funding Boost Key to Access to Justice
Private-Prison Phase-Out Will Not Apply To Immigration Jails →
Logging In...