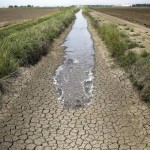 In what’s sure to become a milestone civil case, a group of water districts is suing California regulators over the state’s order prohibiting holders of some of the oldest water rights from pumping water out of rivers and streams. The Sacramento Bee newspaper explains that “… the lawsuit, filed in Stanislaus Superior Court, challenges the State Water Resources Control Board’s decision last week to ban diversions by 114 different rights holders in the Sacramento and San Joaquin river watersheds.”
The Bee adds that “… the affected groups are senior water rights holders. That means they’ve held the right to divert water since before 1914, when California established its rights system. Last week’s decision by the water board marked the first time since the drought of 1977 that any senior rights have been curtailed.”
Western state’s water laws are the stuff of legend, with some using “use it or lose it” policies that fall a bit short on conversation. Read more about the California situation here: Lawsuits challenge California’s drought plan