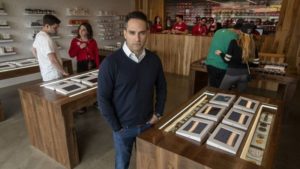 MedMen, a major marijuana industry operator in California with 1,243 employees, faces a lawsuit by its former chief financial officer, the L.A. Times reports.

“As California’s marijuana industry works to project an image of mainstream respectability, one of its best-known companies has come under attack by a former insider,” the newspaper reports.

MedMen Enterprises Inc. is trying to bring pot sales into the mainstream by providing sleek, comfortable stores in high-profile locations, and its strategy often is said to emulate the Apple store model.

The marijuana retailer is being sued by its former chief financial officer, James Parker, “who alleges the Culver City firm forced him out for objecting to a variety of alleged misdeeds at the company, whose stock became publicly traded last year.” A MedMen official denies the allegations.

Parker’s suit was filed in Los Angeles County Superior Court following his departure from the firm on Nov. 5.

“After earlier rounds of private funding, MedMen went public last May through a reverse takeover — MedMen bought an existing Canadian public company — that enabled MedMen’s stock to be listed on the Canadian Securities Exchange,” the L.A. Times reports. “Although California and more than two dozen other states allow medicinal or adult recreational use of marijuana, cannabis remains illegal under U.S. federal law and thus the major U.S. stock exchanges will not list cannabis firms that operate in the United States.”