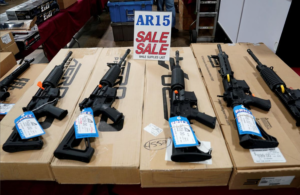 Photo Credit: REUTERS/Joshua Roberts, as included in the report by Reuters on 3/14/19.

Remington Outdoor Co. Inc. can be sued for the 2012 mass shooting at Sandy Hook Elementary School in Newtown, Conn., that left 20 school children aged 6 and 7 and six adult staff dead, a court ruled on March 14.

This marks a “setback for gun makers long shielded from liability in mass shootings,” Reuters reported.

“In a 4-3 ruling widely expected to be appealed to the U.S. Supreme Court, Connecticut’s highest court found the lawsuit could proceed based on a state law protecting consumers against fraudulent marketing,” noted Reuters.

Litigants argued that Remington marketed its AR-15 Bushmaster rifle “based on its militaristic appeal.”

USA Today noted the larger ramifications of the ruling: “By ruling against a gun-maker, the Connecticut Supreme Court appears to have pierced a legal shield that could lead to more lawsuits and damaging disclosures involving the arms industry, gun control advocates say.”

The newspaper added that the method of marketing was questioned, quoting Justice Richard Powers in the majority opinion: “The regulation of advertising that threatens the public’s health, safety and morals has long been considered a core exercise of the states’ police powers.”