Passenger sues airline for suitcase falling on his head 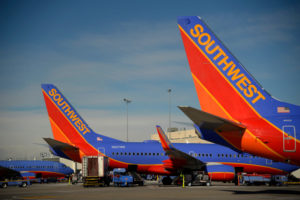 Photo Credit: Joe Amon, The Denver Post as part of a report on the Southwest Airlines law suit.

An airplane passenger has sued Southwest Airlines in U.S. District Court in Denver after a suitcase fell from an overhead bin onto his head, reports The Denver Post.

According to the report, “Charles E. Giebel II was in his plane seat at Denver International Airport awaiting a flight to Newark, New Jersey on March 22, 2017, when an ‘infirm’ passenger trying to load a suitcase in an overhead bin dropped it on Giebel’s head, the lawsuit said.”

Timothy Fields, the Colorado Springs attorney that filed the lawsuit, claims flight attendants should have noticed the passenger was struggling with his suitcase and should have helped.

The Denver Post reported that Giebel is seeking an unspecified award from Southwest.