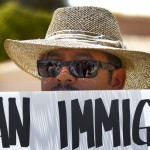 Colorado Public Radio is reporting that the Mile High State “… now has the longest delays in the nation for immigrants trying to have their cases heard before an immigration judge. The average waiting period is 933 days, and there are 9,420 cases pending.”

The network asks Denver immigration attorney Jennifer Casey to explain the situation while noting that it “… could get worse given the immigration-crackdown rhetoric in this political campaign season.”

Her initial comment: “If you look at the immigration courts over the last three years in Colorado, what we’ve seen is a reduction by about 50 percent of the immigration judges here locally. So we went from six judges in 2013 and we’re now down to three judges in 2016.”

The attorney also offers some background: “So, 50 percent reduction in immigration judges, 20 percent increase in cases and then the third factor is that the immigration courts nationally have prioritized certain cases above other cases. So we’ve got a priority docket and those are individuals who have entered the U.S. recently, specifically since May of 2014, who are either unaccompanied children or families with children. Mostly we’re talking about women and children but not exclusively.”

Of course, she also notes that the long delays benefit those with weaker cases to remain in the United States while hurting those with the better cases, because they cannot get a court date to win legal status.

– See more at: Why Denver’s Immigration Court Has The Longest Hearing Delays In The US