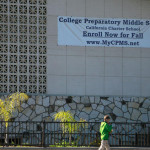 About one-fifth of students in the San Diego Unified School District have turned to charters such as College Preparatory Middle School, above. The district expects that figure to climb. (Misael Virgen / San Diego Union-Tribune)

The Los Angeles Times has a detailed report from the front lines of the Golden State’s public charter schools battles, noting that “… twenty-five years after the California Charter School Act allowed public money to fund charter schools, which can be privately run and are often not unionized, advocates across the county and the state are waging legal and legislative fights. These disputes have led to tense relationships in districts that are scrambling to recoup the thousands of students who have sought alternatives.

Some numbers in the report: In the 2008-09 academic year, 38,680 students attended 73 charter schools in San Diego County. This year, 69,685 students are enrolled in 124 charters. But with growth comes questions.

San Diego County has emerged as a sort of Ground Zero for the California schools debate, although Los Angeles has its share of lawsuits as well.

Read the well-researched report here: Inside the fight against California’s charter schools