Connecticut Newspaper: Civil Gideon Is Catching On For Some Cases 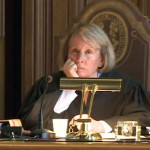 The Hartford Courant newspaper is reporting on new legislation that might provide a right to council in some of that state’s civil cases, similar to the national law covering criminal charges. The report says that “… an influential coalition of jurists and legislators is hoping to change this inequality. They are seeking to bring balance to the scales of justice by creating a new system that would give the poor access to lawyers in civil matters. The movement has been dubbed ‘Civil Gideon,’ after the landmark 1963 Gideon vs. Wainwright, which held that those accused of a crime have a right to a lawyer, whether they can afford one or not.”

Citing sources, the paper says that “… in about 90 percent of the cases in housing court at least one side, usually the tenant facing eviction, does not have an attorney.”

The report makes the case that “… the Civil Gideon movement has taken hold across the nation. The New York City Council is considering a bill that would provide a right to counsel in housing cases, and San Francisco recently completed a pilot program that essentially did the same thing. Meanwhile, the Hawaii Supreme Court has declared that parents who can’t afford a lawyer have a state constitutional right to a court-appointed attorney in cases where the state seeks to terminate their parental rights.”

That said, even advocates admit that establishing a program in Connecticut will take several years and the current proposal is to establish a pilot program. Read the comprehensive story here: