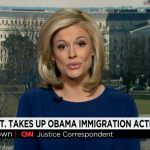 Sweeping immigration reform implemented by President Obama’s executive order, which was frozen by federal courts, will be heard by the U.S. Supreme Court. The court announced this week that it will hear the case that would impact tens of millions of people. CNN notes that “the Supreme Court — which already has a docket bursting with consequential issues — will likely rule on the case by early summer. If the Court greenlights the programs that are considered a centerpiaece of the President’s second term, they will go into effect before he leaves office.”

The CNN report offers background: “At issue is the implementation of the Deferred Action for Parents of Americans and Lawful Permanent Residents (DAPA) aimed at the approximately 4.3 million undocumented immigrants who are parents of U.S. citizens or lawful permanent residents, as well as an expansion of the 2012 Deferred Action for Childhood Arrivals (DACA) targeting teenagers and young adults who were born outside of the U.S. but raised in the country. The President’s actions allow eligible participants to obtain temporary lawful presence and apply for work authorization as well as some associated benefits.”