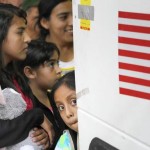 Immigrants from El Salvador and Guatemala who entered the country illegally board a bus after being released from a family detention center in San Antonio, Texas in 2015. (Eric Gay / Associated Press)

Political fallout continues over that immigration judge who recently made headlines for testifying that 3- and 4-year-old migrant children could be taught immigration law and could competently represent themselves in court. The backlash includes a powerful Los Angeles Times editorial that warms readers not to “be fooled” as the government tries to dilute the comments.

The Times notes the actual comment: “You can do a fair hearing,” said Judge Jack H. Weil. “[Children] get it. It’s not the most efficient, but it can be done.” He was testifying in a deposition for a federal lawsuit brought by the ACLU and other legal organizations to challenge the government’s failure to appoint counsel for children facing deportation.

The L.A. Times notes that “… Weil’s bosses promptly disavowed his comments, and he claimed his words had been taken out of context. But don’t be fooled. Weil is an assistant chief immigration judge responsible for training other judges on cases involving children. He is not just knowledgeable about how young people are treated in immigration court, he facilitates the process. His deposition unmasks the government’s deplorable position: Deportation hearings in which children must defend themselves are not right, but they will continue.”

It’s worth noting that Ahilan Arulanantham, deputy legal director at the ACLU of Southern California and the attorney who questioned Weil in the now-infamous deposition, told The Washington Post that he initially thought the judge had misspoken, “because what he said was so outrageous. As I asked further questions, he obviously meant what he said.”

Read the Times opinion, including just how much more likely non-represented kids are to be sent back, here: The injustice of deporting children without representation