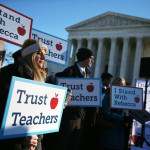 When a case involving California public schoolteachers – and by implication any union’s ability to collect fees from workers who choose not to join and do not want to pay for collective bargaining agreements – was first argued before the U.S. Supreme Court back in January, it seemed headed for another 5-4 vote that would greatly diminish the power of collective bargaining organizations.

But now, in what the New York Times calls “… the starkest illustration yet of how the sudden death of Justice Antonin Scalia last month has blocked the power of the court’s four remaining conservatives to move the law to the right…” it has been upheld on a 4-to-4 vote.

The times reports that “… a ruling in [the union-opposed teachers] favor would have affected millions of government workers and weakened public-sector unions, which stood to lose fees both from workers who objected to the positions the unions take and from those who simply chose not to join while benefiting from the unions’ efforts on their behalf.”

← CBS Details Route To ‘Debtor Prison’ In U.S.
Fallout Continues Over Judge’s Comments That 3-Year-Olds Can Represent Themselves →
Logging In...