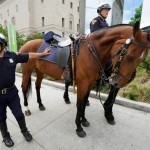 Cleveland mounted police officer Abraham Cortes leans on his horse Paco with fellow officer Michael Herrin (R) on Bas during a demonstration of police capabilities near the site of the Republican National Convention July 14, 2016. Police in Cleveland say they aim to avoid mass arrests at the protests planned for next week’s Republican National Convention, but the fact that the city’s courts are preparing to process up to a 1,000 people a day has some civil rights activists worried. Photo By Rick Wilking/Reuters

As tens of thousands of GOP faithful and some of their critics gather in Cleveland this week, it’s worth noting that they are in a city under a federal consent decree demanding changes in how police do their work. The PBS Newshour notes that “… the consent decree was formed in May 2015 between the United States Department of Justice (DOJ) and Ohio’s second-largest city after decades of complaints lodged by residents over excessive use of force and civil rights violations by members of the Cleveland Police Department.”

The Newshour backgrounds that “… a DOJ investigation found a pattern of ‘unnecessary and excessive use of deadly force,’ retaliatory force with ‘Tasers and chemical spray and fists’ and the ’employment of poor and dangerous tactics,’ among a slew of other conclusions.
But many of the stipulations forged in the agreement will not be installed in time for the Republican National Convention (RNC), according to interviews with the DOJ, legal and civil rights organizations and a court-designated independent monitor of the Cleveland Police Department.”

“The milestones and the benchmarks are not being met,” said Jacqueline Greene, a source for the PBS report identified as co-coordinator of the Ohio Chapter of the National Lawyers Guild, and a civil rights attorney. “Therefore it won’t apply during the RNC”