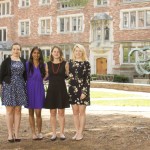 The story begins like this: “Cruz Montano and her daughter were two of the thousands of women and children who were taken to an immigration detention center in Dilley, Texas after crossing the border into the U.S. seeking refuge. They were also among the earliest clients of a newly formed organization called the Asylum Seeker Advocacy Project (ASAP), founded at Yale Law School.”

The Yale Law website backgrounds that “… Conchita Cruz ’16, Swapna Reddy ’16, Dorothy Tegeler ’16, and Liz Willis ’17 co-founded ASAP in the Spring of 2015 to respond to the unmet legal needs of Central American refugee families, both while detained in border detention facilities and after release. The project started as a volunteer effort funded by the Gruber Project for Global Justice and Women’s Rights at Yale when the co-founders traveled with fellow law students to the Texas detention center. There, they filled a gap in legal services by representing a Honduran mother at her trial, helping to secure her and her 8-year-old son’s legal status and release from the facility.”

Studies have indicated that refugees with legal help are many times more likely to gain residency status in the U.S.