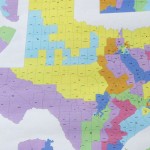 A Texas redistricting plan based on the old — and now upheld — principle of counting everyone. Photo Credit, Vox report 4/3/16

Vox has published the best “explainer” so far on that Texas lawsuit over how states can set up congressional districts, noting that the issue got a rare 8-0 decision out of the usually divided (on big issues, at least) US Supreme Court. The website nots that the case, Evenwel v. Abbott, concerned a “… proposal to change who got counted in drawing up congressional districts — which would have given more political power to largely white areas while reducing the power of heavily Hispanic and Asian-American ones.”

It’s a demographic concern. More white Americans are over 18 and thus can vote, so it becomes a question on how to count people who are not qualified to vote because they are too young. Texas started out as defending the current process, then more or less joined the other side of the lawsuit. Vox also explains how the decision also sets up the next round of similar debates.