Help U.S. In War? Forget It When Seeking Asylum 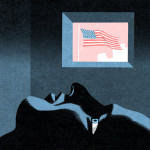 The New York Times has an important story about an asylum-seeker who worked with the American military in Kabul for years, enough to fear for his life. He made his way to the United States and sought asylum, making a case complete with death threats and the testimony of American military officers. Yet he was jailed for his trouble.

Reporter Elizabeth Rubin, who has reported from the Middle East and credits translators like the one in question for saving her life, outlines just how sad the immigration/asylum system has become. She notes that “… we know our asylum policy is broken. In 2014, more than 108,000 asylum applications were filed. It is not an exaggeration to say that many of these cases are life or death, yet they are handled by only 254 immigration judges, who are also juggling hundreds of thousands of non-asylum cases. Samey’s case is simultaneously unique and painfully common…”

She offers examples of possible fixes. But she also outlines a truly cautionary tale of a system where a state department administrative judge somehow values his own assessment over that of a Lt. Col. in the U.S. military.

Locked Up for Seeking Asylum