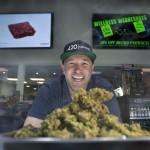 Confusion and civil lawsuits abound in the Orange County, California city of Santa Ana over legal marijuana sales –and the fringe shops that may or may not be legal.

Attorney Arthur Travieso is representing a shop called Live2Love and four other unlicensed pot shops in lawsuits against Santa Ana, claiming the city’s lottery process was unfair because it allowed multiple entries by the same individuals, as long they applied and paid a $1,690 fee. Some shops also say they are legal under the state’s medical marijuana law and don’t have to follow city regulations.

The OC Register newspaper also notes that “… Santa Ana police garnered unwelcome international attention after a May raid caught on video showed officers forcing Sky High customers to the ground and eating merchandise. Three officers involved in the raid were charged this month with petty theft and vandalism.” And, you guessed it, that brought more lawsuits.

Category: Cannabis in the Courts, Community