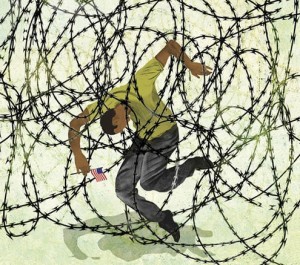 Illustration by Brian Stauffer used in a report by The Houston Press, “Immigration Backlog Bounces Thousands of Cases to Late 2019,” 2/10/16

The Houston Press newspaper starts with immigration attorney John Nechman explaining how busy he used to be before “all of his removal cases scheduled to be heard in Houston’s downtown immigration court were reset to the same ten-day span in November, 2019.” And he says “it’s like that for every immigration attorney in town.” Obviously, the report points out, there’s no way all the cases actually scheduled for November, 2019 can be heard – it seems like a good holding date that’s still in this decade.

There are thousands of cases in Houston and also San Antonio and speculation is that they will actually get bumped back into the next decade. Nechman explains the irony: “good” cases, likely to be allowed to remain in the U.S. get the shaft because they remain in legal limbo for years and years; meanwhile, “bad” cases likely to get sent out of the country get years and years to become part of the culture and remain in the U.S.  Houston has the most pending cases in Texas, and is nationally third behind Los Angeles and New York City.
If you’re among those who feel like the immigration court, which is actually an administrative function of the Justice Department and not a federal court at all, has become dysfunctional with its 450,000-case backlog, then this story confirms your worst fears.